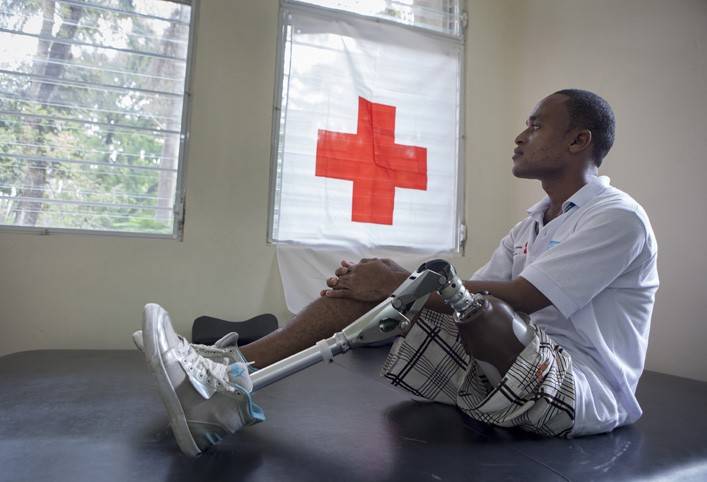 With support from the American Red Cross, hundreds of vulnerable Haitian families – including many people with disabilities – have moved into new homes in and around Petit Goave in Haiti’s mountainous southwest region.

Based on traditional Haitian design, these homes are made of wood with latticework sides that allow for plenty of ventilation. Although the structures are semi-permanent, the design allows residents to upgrade them to make them more permanent shelters with the addition of plastic sheeting and concrete to cover the walls.

Desir Dieulitan has already made improvements to his home, as a row of plants and large seashells line the porch at the front of the green-roofed house. Pieces of flowing white fabric cover the doors and windows, and large sheets of green plastic cover some of the walls. He has added electricity and built shelves in the corners of the one-room house, which is simple and tidy. At the corner of the lot, he has access to a new latrine that is raised well above the ground because the land is prone to flooding.

Dieulitan has experienced more than his share of tragedy in life. Nine years ago he broke his left leg in a bus accident. A first surgery on the leg was unsuccessful, so the doctors broke his leg a second time and operated again. This surgery was also unsuccessful, and meant one leg was shorter than the other. He walked with a pronounced limp, and offers to show a long, deep scar on his thigh. He once worked as a mason, but has not been able to do so since the accident.

Handicap’s program is available to vulnerable populations as well as the disabled – such as people who are paralyzed, had amputations, have visual challenges or hearing impairments. Despite their challenges, the Haitians who receive these homes are expected to collect water, sand and rocks to aid in their construction.

“We want the participation of beneficiaries, but also people from the communities,” says Carole Dehu, field coordinator for Handicap in Petit-Goave.