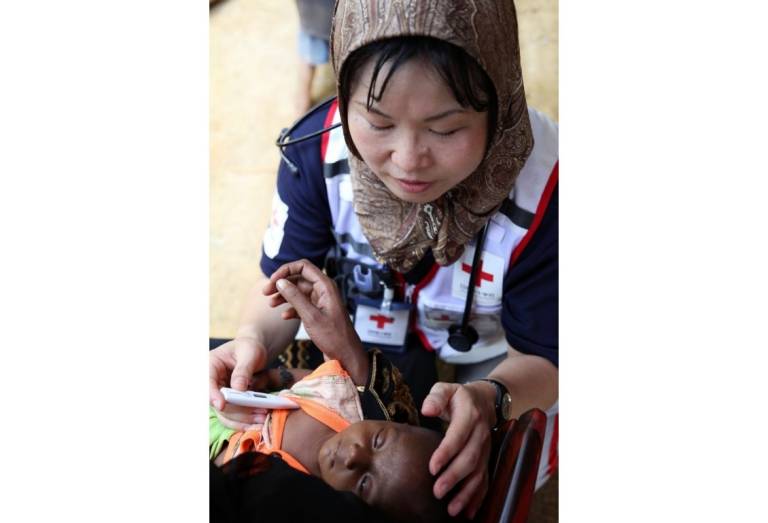 Even as American Red Cross teams work day and night in the wake of historic hurricanes in the United States, we continue to provide aid to communities impacted by disasters around the globe. Here’s a look at the ways American Red Cross is supporting disaster relief efforts abroad over the past few months.

The American Red Cross deployed four disaster specialists and contributed $150,000 towards hurricane relief efforts in Dominica—where nearly all houses were demolished, crops destroyed, and 75 percent of the natural landscape swept away by Hurricane Maria. Red Cross teams provided support to local health clinics, hospitals and prisons in the immediate aftermath of the storm through the distribution of hygiene kits, solar lights, blankets and kitchen sets. The American Red Cross is helping the Dominica Red Cross and the International Federation of Red Cross and Red Crescent Societies (IFRC) with damage assessments, telecommunications connectivity, reconnecting family members, and are currently evaluating the feasibility of distributing cash as aid.

“Imagine water waist-high, and it has brought down all the debris with it. It was terrible,” remembers Moses Lewis, a baker from the island nation. Watch a video of Lewis here: Determined to rebuild after surviving ‘hell’ in Dominica.

An earlier storm—Hurricane Irma—slammed into St. Kitts & Nevis and Antigua & Barbuda, where housing, agricultural land, infrastructure, and health services were severely affected. Nearly 90% of the structures on the island of Barbuda were damaged or destroyed by Hurricane Irma, which led to a complete evacuation from the island.

“When our boat pulled up to the shore, you could already tell that the island was devastated,” says Laura Archer, a Canadian Red Cross health specialist who is helping evacuees return to Barbuda. “Trees were down, power lines were down, most buildings were missing their roofs, if not completely flattened. The hospital structure is very damaged as well, there is stagnant water all over the place, so there are many things that need to be addressed right away in terms of health.” The Canadian Red Cross, in coordination with the Ministry of Health, delivered and set up a pop-up emergency room that can serve two patients at a time and has the necessary basics such as medicine, gauze, resuscitation equipment, and other tools.

In addition, Red Cross volunteers are delivering first aid services in shelters, during relief distributions and other activities that take place on the island. The American Red Cross contributed $100,000 for disaster relief to help Red Cross teams in St. Kitts & Nevis and Antigua & Barbuda.

American Red Cross’s delegation in Haiti prepositioned relief supplies—such as blankets, water and sanitation supplies, tarps, and cooking supplies—in the northern region of the country in anticipation of Hurricane Irma’s arrival this summer. Staff warned local populations in the north, where the hurricane was most likely to strike. Haiti suffered some damage from Hurricane Irma, but was spared in comparison to other countries in the Caribbean.

To date, floods have destroyed 100,000 homes and damaged nearly 760,000 acres of land that people rely on for farming, agriculture and livestock. The Bangladesh Red Crescent has been coordinating with the national government to quickly respond to the disaster. Volunteers are actively supporting branch offices around the country, where they have started distributing food and water—and are helping people find safe shelter.

And on the country’s border with Myanmar—where more than 500,000 Muslims from Rakhine state are seeking safety, Red Cross and Red Crescent teams are providing healthcare, distributing water, food, hygiene kits and shelter materials. “The journey took us seven days. We came by foot and by boat and had to pay money. We had trouble crossing the river – there was mud, and no food, no food for the children,” says an exhausted Rajuma Khatun. Read more about the Red Cross and Red Crescent’s efforts responding to the migration crisis here.

And in a true show of solidarity, more than 100 Red Cross aid workers from Colombia, Costa Rica, Denmark, Finland, Honduras, Israel, Mexico, and Spain have joined their American Red Cross counterparts to deliver humanitarian relief to Americans devastated by Hurricanes Harvey, Irma, and Maria in the USA. See photos and details, here: Red Cross Aid Workers from Around the Globe Help Americans in Wake of Hurricanes.