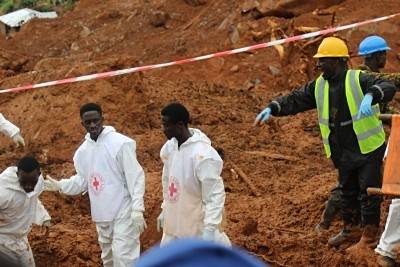 Last week, mudslides in and around Sierra Leone’s capital killed more than 400 people and displaced thousands. As families reel from the tragedy—which destroyed or damaged more than 600 homes—Sierra Leone Red Cross volunteers continue to provide comfort and aid.

Multiple days of heavy rains triggered severe mudslides in the coastal suburb of Racecourse on the city’s eastern edge, as well as in Regent and Lumley where thousands of makeshift settlements are home to the city’s poorest communities.

“I have never seen anything like it,” said Abdul Nasim form the International Federation of Red Cross and Red Crescent (IFRC). “A river of mud came out of nowhere and swallowed entire communities, just wiped them away. We are racing against time, more flooding and the risk of disease to help these affected communities survive and cope with their loss.”

“While we are still in the critical emergency phase of the response, we also have to start anticipating the long-term needs of families who have lost their homes and livelihoods. We will need to accompany them,” remarked IFRC Secretary General, Elhadj As Sy.

More than 1,600 families were impacted by the floods and mudslide.

Red Cross volunteers and staff have been at the forefront of the response, carrying out search and rescue operations, giving first aid to survivors and comforting the bereaved.

“Our staff and volunteers, many of whom come from the affected areas, are shocked by the sheer destruction of this disaster,” said Constant Kargbo, Secretary General of the Sierra Leone Red Cross. “The needs are massive. Damaged roads, power outages and broken communication lines present huge challenges for our volunteers to reach and support the affected communities.”