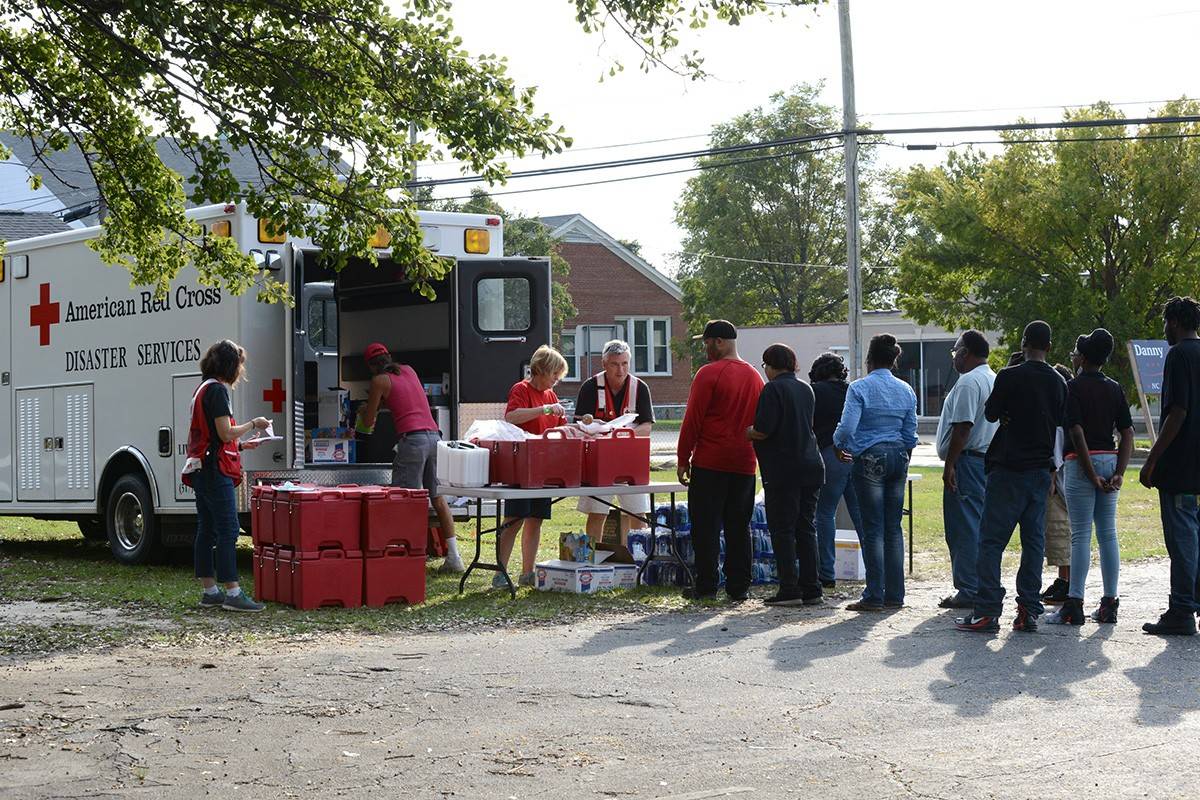 WASHINGTON, D.C. — October 21, 2016 — More than two weeks after Hurricane Matthew began its path of destruction, the American Red Cross has served more than a million meals and snacks, and provided 97,000 overnight shelter stays to people in need, prompting the charity to issue a call for the public’s help.

“The effects of Hurricane Matthew are still causing significant flooding in parts of North Carolina and South Carolina. We are here providing food, shelter, relief supplies and other support to help thousands of people whose lives have been upended by this storm,” said Brad Kieserman, Red Cross vice president, Disaster Operations and Logistics. “We’re in the middle of a vast response, and our work is far from over. The Red Cross will be here as long as people need our help.”

MAKE A DONATION The massive Red Cross relief effort in response to Hurricane Matthew in the U.S. could cost between $24 – $28 million as volunteers continue to help in the weeks ahead while residents recover from the devastation – yet, the Red Cross has raised only $8.1 million in designated donations and pledges for the response to Matthew thus far.

The Red Cross depends on donations to provide immediate relief. Help people affected by Hurricane Matthew by visiting redcross.org, calling 1-800-RED CROSS, or texting the word MATTHEW to 90999 to make a $10 donation. Donations enable the Red Cross to prepare for, respond to and help people recover from this disaster.

RED CROSS RESPONSE Preliminary reports indicate more than 12,000 homes across four states have been affected. The Red Cross has deployed more than three-fourths of its emergency vehicle fleet, along with 5,500 disaster workers to provide relief. Working alongside dozens of partners, this help includes:

ROLL UP A SLEEVE TO REPLENISH THE BLOOD SUPPLY Hurricane Matthew has had far-reaching impacts in the Southeast, forcing the cancellation of approximately 110 blood drives resulting in nearly 3,500 uncollected blood and platelet donations. Right now, there is an emergency need for platelet donations in many areas of the country. Platelets are a key clotting component of blood often needed by cancer patients that must be transfused within five days of donation. Eligible blood and platelet donors are urged to make an appointment as soon as possible to help replenish the blood supply for patients in need. Appointments can be made by using the Red Cross Blood Donor App, visiting redcrossblood.org or calling 1-800-RED CROSS (1-800-733-2767).

HELPING IN HAITI The American Red Cross, with a permanent team in Haiti of almost 200 staff, continues to work with local and international partners to deliver critical relief to aid many of the 175,000 residents displaced by Hurricane Matthew.

American Red Cross and Haitian Red Cross teams have been distributing items including cholera-kits, hygiene kits and kitchen (cooking) kits, water purification products, shelter items and mosquito nets to meet people’s urgent needs. Cholera is an increasing threat due to damaged water systems and the lack of potable water; thus the provision of cholera kits —which contain items like soap, water purification tablets and oral rehydration salts – are an effort to help stem this threat.

The American Red Cross is also supporting the Haitian Red Cross in coordinating between local authorities and other humanitarian organizations, and is working directly with the United States government to help distribute relief supplies.