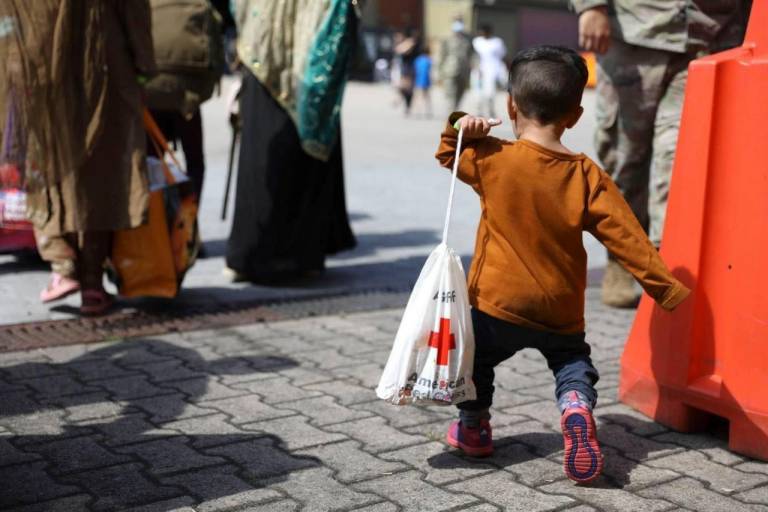 A young Afghan evacuee totes his American Red Cross comfort kit alongside his family after arriving in Germany. 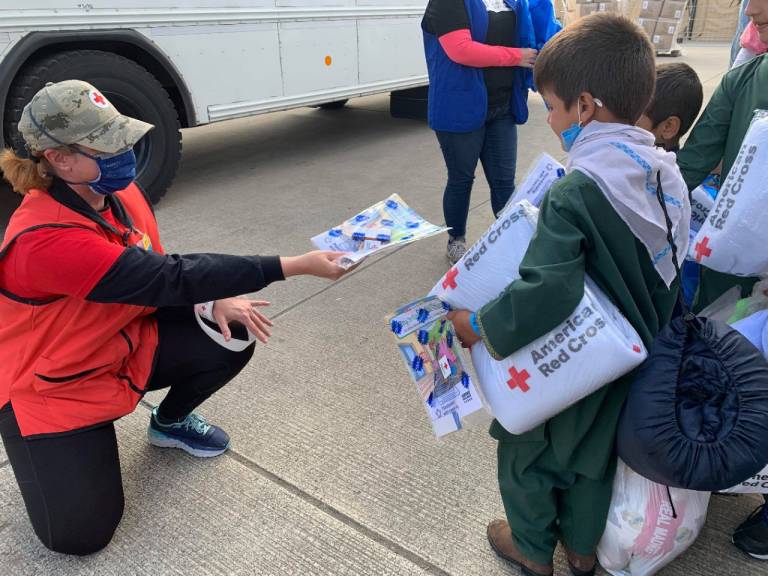 Veteran Jami White Malcolm provides crayons and coloring pages to Afghan children in Germany. She assisted evacuees as they arrived for their temporary stay. 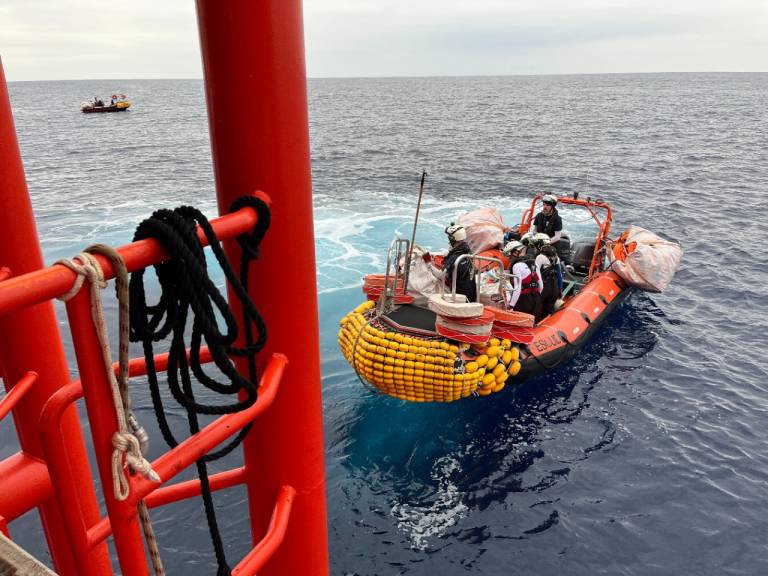 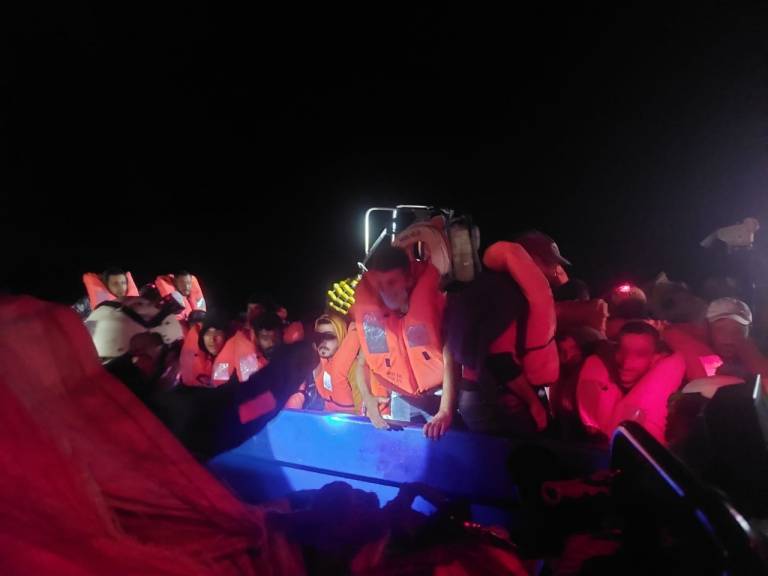 This year people all around the world have faced dire conditions and emergency needs stemming from the challenges of the pandemic, climate change and global conflict.

Around the globe, COVID-19 has converged with severe drought and conflict, creating massive humanitarian needs for a growing number of displaced families. According to UNHCR, the United Nations Refugee Agency, some 84 million people were forcibly displaced this year.

The world’s most vulnerable people are most affected by these struggles. After living through perilous journeys, migrants often arrive with nothing but the clothes on their backs. They are desperate — hungry, exhausted and frightened. Be it unaccompanied children at the U.S.-Mexico border, displaced families from Afghanistan at U.S. military bases or migrants in distress in the Mediterranean Sea, the American Red Cross has been there to provide medical assistance, emotional support and critical relief items.

This year, at the request of federal government partners, Red Cross workers distributed more than 2.1 million essential items — blankets, diapers, medicine and toys — for evacuees from Afghanistan, as well as unaccompanied children seeking asylum at the U.S.-Mexico border.

SUPPORT AT THE SOUTHERN BORDER

In early 2021, a surge of young people arrived alone at the U.S.-Mexico border and the American Red Cross was called on by the federal government to help provide these children with a safe place to stay until they could connect with a relative or sponsor in the U.S.

Red Cross volunteers deployed to several sites after intense training in sheltering operations and COVID-19 safety protocols to provide these children with a safe, clean and comfortable place to stay after their difficult journey north.

Many had traveled alone, facing unimaginable difficulties along the way. Some had no shoes and only the clothes they wore. They arrived at the border, not sure where they were or what their fate would be. But the Red Cross is a recognized international symbol and often the children shared that they knew they were safe when they saw Red Cross workers.

In addition to helping provide shelter for the unaccompanied minors, the Red Cross provided relief supplies — such as cots, blankets, hygiene items, masks and hand sanitizer — for use by local nonprofits caring for migrants in Texas and California. The Red Cross also provided phones to organizations in Texas and Arizona which migrants used to reconnect with family members back home.

CARING FOR EVACUEES FROM AFGHANISTAN

In August, the Red Cross was asked to help care for evacuees from Afghanistan arriving at U.S. military bases at home and abroad. More than 800 Red Crossers answered the call to welcome families with open arms and basic aid.

Families who evacuated from Afghanistan had been through a lot of pain. Our teams provided health and mental health services — and made sure they had necessities such as hygiene items, clothing, cribs, diapers and more. People left critical items behind in the rush to evacuate, so the Red Cross replaced prescription medications, eyeglasses, canes, wheelchairs and other items.

The teams also helped evacuees connect with missing family members through the Restoring Family Links (RFL) program. As they arrived at U.S. military bases, volunteers ensured that they could be enrolled in the RFL program as quickly as possible. Working with the International Committee for the Red Cross (ICRC), the American Red Cross helped develop an rapid registration tool to make it easier for people to immediately open a family tracing request to find their missing family members. Evacuees were also provided the opportunity to connect with family and friends through the use of free Internet and laptops, phones and tablets.

As government agencies expanded their capacity to care for evacuees, onsite Red Cross support at military sites and airports in the U.S. transitioned to other organizations in late September. The mission overseas concluded in October with the final passage of evacuees over to the U.S.

Currently, the Red Cross continues to provide RFL services to help reconnect family members separated by the crisis, as well as supporting military families and veterans struggling with the aftermath of the events in Afghanistan.

In late fall, Jenelle Eli, a member of the American Red Cross Communications team in Washington, D.C., joined a team of International Federation of Red Cross and Red Crescent Societies (IFRC) and NGO SOS MEDITERRANEE workers to rescue people from the waters of the central Mediterranean Sea.

The team was able to rescue more than 300 people making the journey on the treacherous Central Mediterranean route between Libya and Europe — the most dangerous migrant route in the world. Those rescued ranged in age from babies to the elderly. Many of the young were alone.

In the first nine months of this year, more than 1,200 people are known to have died trying to cross these dangerous waters in small wooden boats or inflatable dinghies. While these are the officially recorded numbers, it is believed that many more have perished at sea.

“The sea can be a dangerous place,” Eli said from the deck of the Ocean Viking. “We've gone through a lot of training to keep ourselves safe and ensure survivors feel comfortable onboard after they're rescued,” she said. The crew provided first aid, comfort, dry clothes, food and blankets to those they rescued.

Visit these links to learn more about this year’s work to support refugees in need.

Red Cross Aid to Asylum Seekers and Migrants at the U.S.-Mexico Border 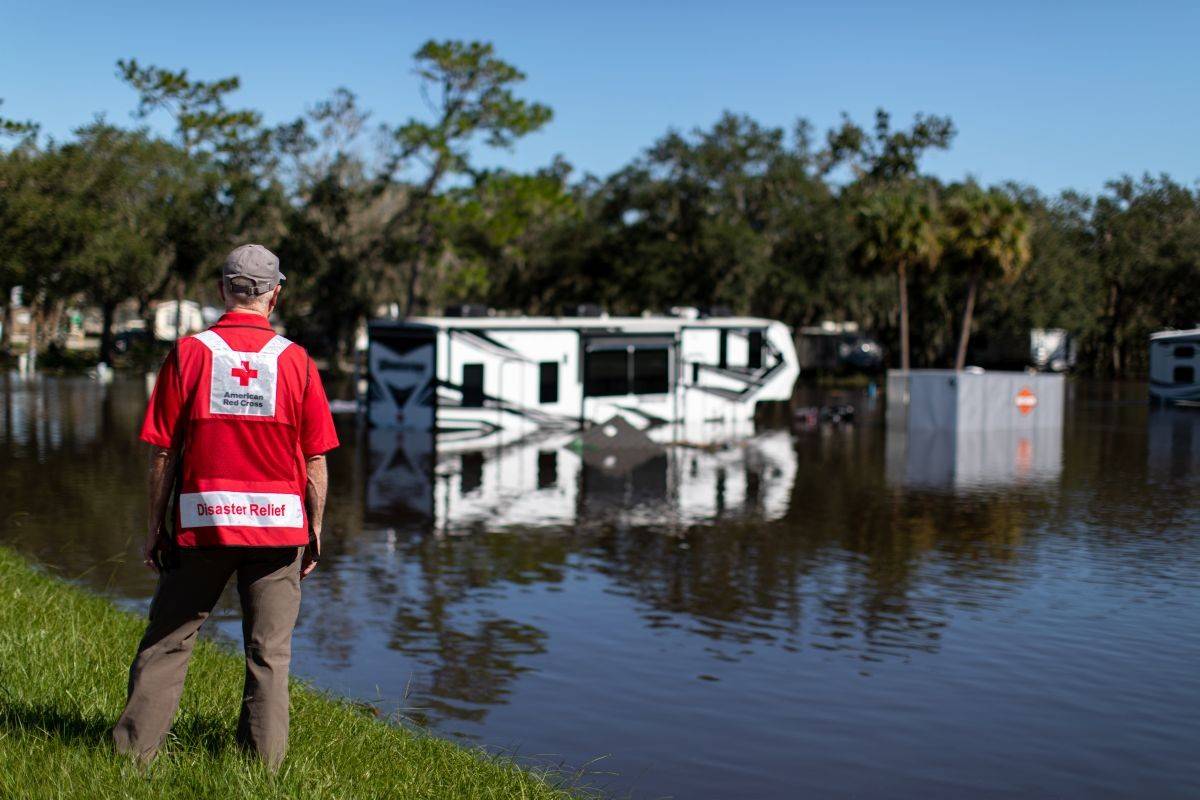 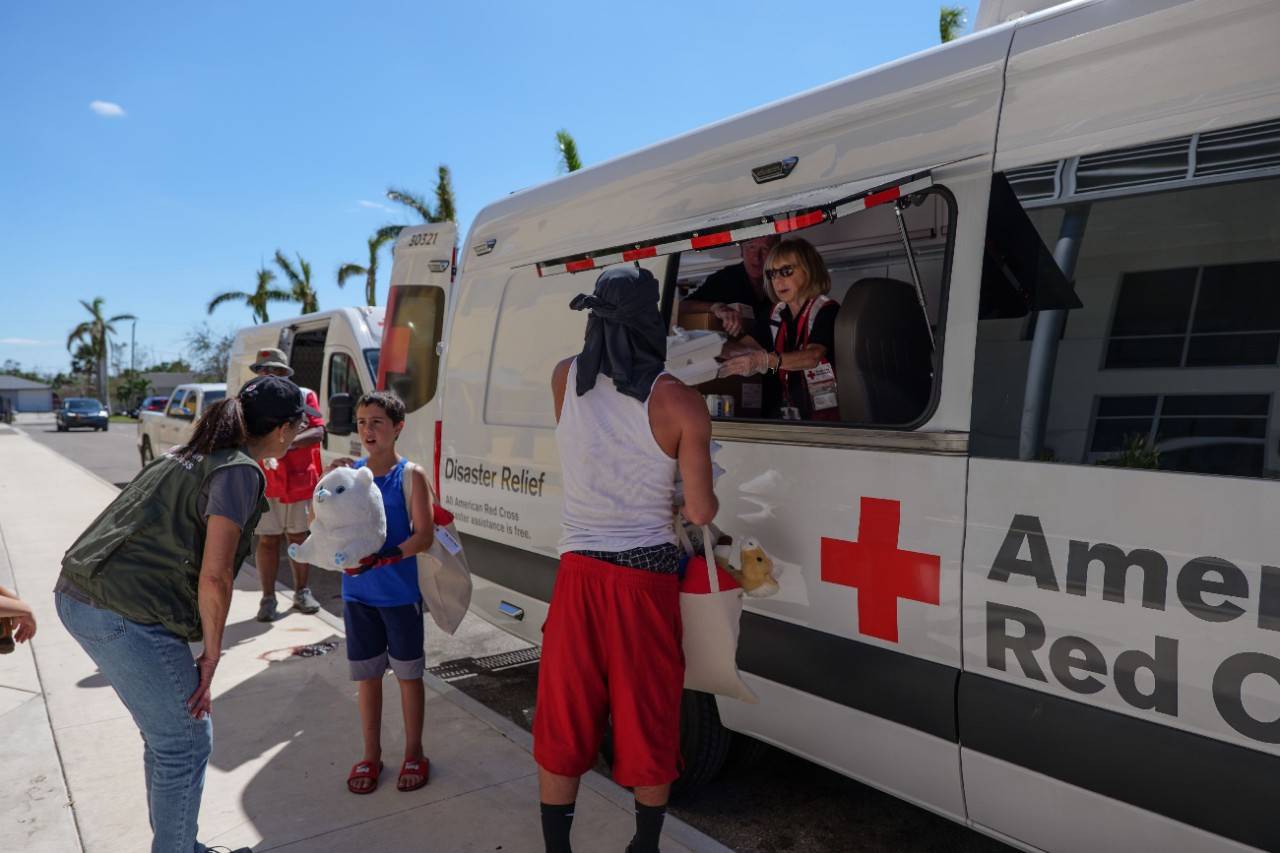