Hurricane Matthew: The Red Cross Continues to Work in Haiti

Hurricane Matthew: The Red Cross Continues to Work in Haiti 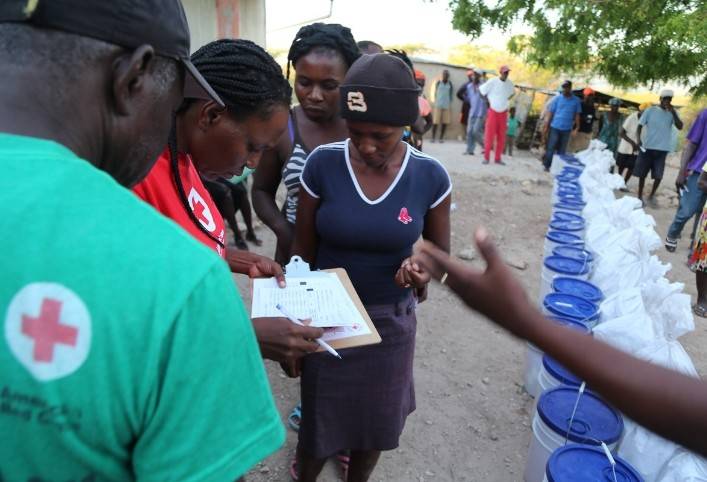 More than two weeks after Hurricane Matthew made landfall, the American Red Cross continues to work with partners in Haiti to mobilize and deliver critical relief following this historic storm, the largest disaster in Haiti since the 2010 earthquake.

“Our hearts go out to the people of Haiti who’ve been so tragically impacted by disaster once again,” said Lesley Schaffer, Regional Director, Latin America and the Caribbean, American Red Cross. “Together, the global Red Cross network is addressing urgent needs on the ground including shelter, clean water, sanitation and stemming the spread of cholera.”

Matthew, the largest storm to hit the country in 50 years, has left widespread flooding, damage to infrastructure (water systems, electricity and roads) and major crop and livestock loss. According to the United Nations 1.4 million people are in need of humanitarian assistance, mainly in the southern peninsula (Sud, Nippes, and Grand’Anse Departments) as well as in the Ouest and Nord-Ouest Departments.

The American Red Cross is playing a key response role, working with the Haitian Red Cross, and other aid organizations in several affected departments reaching thousands of affected households with the distribution of hygiene items, cooking supplies and shelter kits. Because of the increased threat of cholera, the American Red Cross is also providing soap, oral rehydration salts and water purification tablets to shelters and medical facilities and conducting outreach to spread awareness about prevention and treatment of the disease. Additional relief supplies for water purification, as well as mosquito nets and shelter supplies, are being procured locally and internationally for distribution.

The American Red Cross is assisting the Haitian Red Cross with logistics, communications and financial resources.

“The American Red Cross is proud to work with and in support of the Haitian Red Cross and their committed team of volunteers,” said Schaffer. “This partnership has been central to our work in Haiti since the 2010 earthquake and prior.”

To augment the capacity of the Red Cross Red Crescent network, the American Red Cross has deployed 11 disaster response specialists to lend their humanitarian relief expertise in areas such as emergency distribution and telecommunications support.

Working remotely, the American Red Cross Information Management and Geographic Information System team is working with 2,000 remote mapping volunteers from around the world who have helped make more than 2.5 million edits to OpenStreetMap for Haiti using satellite technology. These updates connect field teams with important information about damage to buildings and roads and help relief teams on the ground more efficiently identify and reach affected communities.

Destroyed communication systems, coupled with poor road accessibility continue to prevent many people from reaching their family members located in the areas devastated by Hurricane Matthew. To facilitate communication between family members, the Red Cross Restoring Family Links program has activated the FamilyLinks website, available in English and French, https://familylinks.icrc.org/online-tracing/, where individuals can register missing persons, register themselves as safe and search a database of other registered persons. To restore cell phone communication, three antennas placed by the International Committee of the Red Cross in the affected regions enable people to contact their loved ones.

The American Red Cross in Haiti

After the 2010 earthquake, people generously donated to the American Red Cross, eventually contributing $488 million to address urgent needs in the quake’s aftermath. This money helped save lives with food, water, medical care, tarps, sanitation and cholera vaccinations among many other services and projects delivered over the past nearly seven years. Because of this support, the American Red Cross has invested in 22 hospitals and clinics in Haiti—including the Mirebalais Hospital run by Partners In Health. We have also reconstructed schools, built the country's first wastewater treatment plant, helped more than 380,000 with livelihoods initiatives, and assisted more than 22,000 families through a spectrum of housing and neighborhood recovery projects. Today, there are nearly 200 American Red Cross staff members permanently based in the country, more than 90 percent of whom are Haitian nationals. The American Red Cross has been working in Haiti since 2004.

To learn more about our work in Haiti, visit www.redcross.org/haiti.