Q&A from the field: Reconnecting loved ones in Dominica

Q&A from the field: Reconnecting loved ones in Dominica 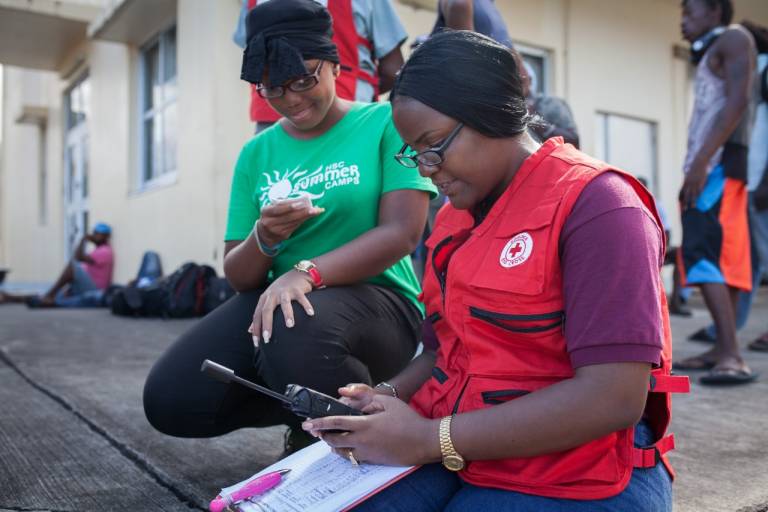 The Red Cross is helping hurricane survivors on the island of Dominica to reconnect with loved ones through satellite phones and written messages. 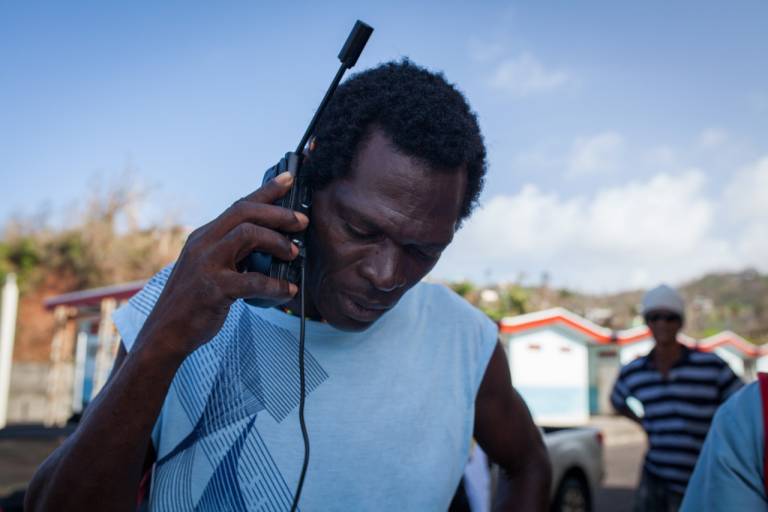 “I just want people to know that connecting family members is a critical form of aid following natural disasters,” says Susan Schaefer, who deployed to Dominica in the aftermath of Hurricane Maria. 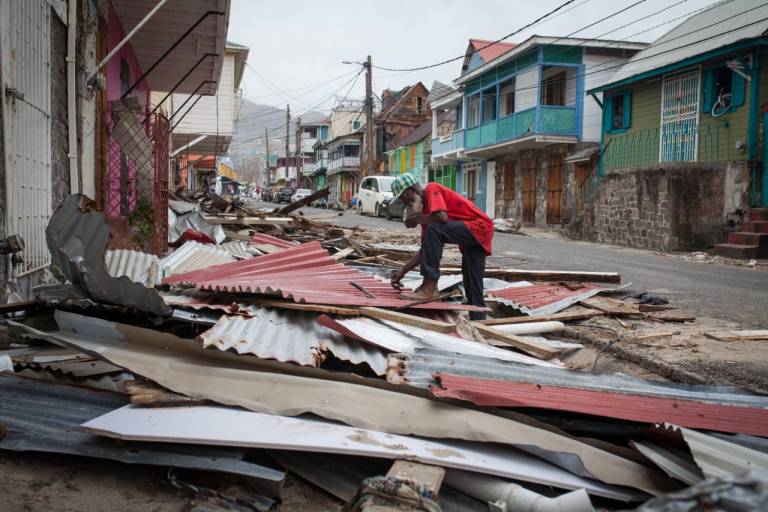 Hurricane Maria damaged 98 percent of all roofs and swept away 75 percent of the natural landscape in Dominica.

Hurricanes Irma and Maria caused massive destruction across the United States and the Caribbean. Power, connectivity, and damaged infrastructure left many on residents of islands without basic necessities—or a way to get in touch with loved ones.

Dominica was the first amongst Caribbean islands to be hit by Hurricane Maria. Because the island nation’s communication infrastructure was so severely impacted, many of the 73,000 residents on the island still don’t know what damage has been done to neighboring communities and still have no idea if the ones they love are safe. Through our family reconnection project, Restoring Family Links, the Red Cross is able to help people on Dominica locate missing family members via phone calls and written letters.

We spoke to Susan Schaefer, a Red Cross disaster responder, about her deployment to Dominica.

Q: Can you tell us about your job on the island after the storm hit?

A: I deployed to Dominica as part of a larger team made up of Red Crossers from 15 different countries, all with diverse specialties.

The island of Dominica is small. Before the storm you could drive from the north coast to the south in about an hour. But the hurricane damaged infrastructure on the mountainous island, so it’s not easy to get from one community to another right now. Family members who may seem geographically close are actually quite far from reaching one another.

Q: What is your daily routine?

A: Every day, our Red Cross team goes to communities impacted by the storm. We bring along satellite phones and announce that people can use them to call family members anywhere in the world to let them know they are okay. Often people may not know their family’s phone numbers by heart, so we also bring equipment that enables people to charge their phones and find contact information.

So many are able to reach their loved ones for the first time, even weeks after Hurricane Maria, to tell them they are okay. When survivors are unable to reach family members by phone, we provide an opportunity to write a message. We then work with Red Cross societies in other countries to deliver those messages to families.

Q: How many families have been able to reconnect because of the Red Cross?

A: So far, between the phones calls and written messages, the Red Cross has helped more than 500 families from the island to reconnect with family members on Dominica or abroad.

Q: What are some of challenges you face?

A: I think what I find to be most challenging is that addresses in Dominica are not like U.S. postal addresses, with a house number and street. They’re more like guidance of where to start looking, so this proves to be challenging when we’re trying to find someone. Without the Dominica Red Cross volunteers and the local communities guiding us, I don’t know how we’d be able to accomplish things. Local knowledge together with teamwork is invaluable—I couldn’t have asked for a better group of people to work with.

Q: Any stories that will stick with you for a long time?

A: Television, newspaper and even radio reports are still difficult to come by on the island. Shortly after the storm, the local radio station resumed broadcasting, but with a limited reach because many of their towers were down. People were coming to the station to announce that they were either looking for someone or that they had news about someone’s fate. Three weeks after Hurricane Maria, one gentleman was able to call his family using our satellite phones. He knew that he had been reported on the radio as being killed in the storm and when he reached his family they were actually planning his funeral. Our volunteer said he could hear the family crying on the other end of the call. Imagine being able to tell your family that you’re alive! It’s one of those moments that drive home the importance of family and being connected. It’s a reminder of why we’re here in Dominica doing this work.

Q: What is the one thing you’d like people to know?

A: I just want people to know that connecting family members is a critical form of aid following natural disasters. If you don’t know whether your kids or your family members are okay, it’s easy to forget to take care of yourself, to remind yourself to eat and sleep. You just can’t focus on anything else. Being able to provide peace of mind to people helps them to be stronger for themselves so they can focus on their recovery.

Q. Was it hard being away from your own friends and family for a month?

A. It was definitely difficult, but I was able to stay in contact with family online, since we had a mobile hotspot with us. Also, cell service started to return to Roseau early so I was able to call home a few times. And not to sound too corny but our team was made up of a really great group of people who were all very supportive of each other and the work we were all doing. Under those conditions, you end up forming a different kind of family—so you still have people to lean on if you ever need support.

Q. Deploying to a disaster zone for a month is difficult. What’s the best thing you packed?

A. This is an honest tie between packets of peanut butter for an energy boost (and served as my lunch several times) and bug spray. Lots and lots of bug spray. The mosquitoes are ruthless.

Separated from a family member due to conflict, war, or natural disaster? We may be able to help. To begin a search, contact your local Red Cross chapter—the critical link in your community to the global Red Cross Red Crescent network. You can also call our free national helpline at 844-782-9441 or use the International Reconnecting Families Inquiry Form