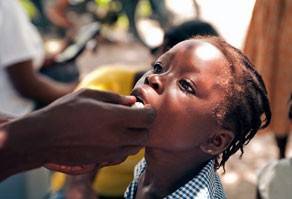 With a surge in cholera cases at the start of Haiti’s rainy season, the Red Cross is stepping up its ongoing response to a disease outbreak that first emerged in Haiti last autumn.

Teams of Red Cross health educators are being deployed to cholera “hotspots” to spread prevention messages as well as to distribute thousands of bars of soap and sachets of oral rehydration salt (ORS), which helps to keep those suffering with cholera healthy and hydrated.

In addition, a Red Cross cholera treatment center in Carrefour Feuille is being reopened to handle a significant increase in cholera cases in and around Port-au-Prince. The center is one of several operated in Haiti by the global Red Cross network. Cholera facilities have been stretched to full capacity in recent days, as thousands of people seek treatment. The rise in cases – which had slowed earlier this year after the initial cholera outbreak in late 2010 – started in rural areas but has hit the Port-au-Prince area in recent days.

The global Red Cross network is also sending text messages to people in high-risk areas letting them know where their nearest cholera treatment centers are located and providing practical information on prevention, treatment and symptoms. The weekly ‘Radyo Kwa Wouj’ radio show produced by the Red Cross, which broadcasts in Creole nationwide, has also turned its focus back to cholera, with listeners able to call in and have their questions answered live on air.

The American Red Cross, which has committed more than $16 million to address cholera outbreaks, has an active and expanding community-based cholera program that focuses on prevention through education and distribution of life-saving materials. A team of about 200 Red Cross health promoters has been working for months, going tent to tent, to talk with camp residents and other vulnerable people about how to prevent the deadly disease.

Amid the current surge in cholera cases, the team is deploying to particular problem areas. “Where there are hotspots, we’ll tackle them,” said Meg DiCarlo, senior health delegate with the American Red Cross.

Thus far the American Red Cross has reached more than 214,000 people with its cholera programs in the Port-au-Prince area, and distributions have included more than 1.2 million bars of soap (handwashing is an important part of prevention), more than 4.4 million water purification tablets, and more than 55,000 ORS at 38 distribution points.

The American Red Cross is part of a coordinated effort, providing cholera programs in 48 camps in the Port-au-Prince area, as well as neighborhoods and schools. There is also an active program in northeast Haiti, particularly targeting schools. Nearly 1,000 students in the region received cholera prevention training in the month of May alone. The program is expanding to rural communes in the north and west departments of Haiti.

In addition to directly addressing cholera outbreaks in Haiti, the American Red Cross has provided financial support for cholera programs across the country that are run by the global Red Cross network and several external partners.