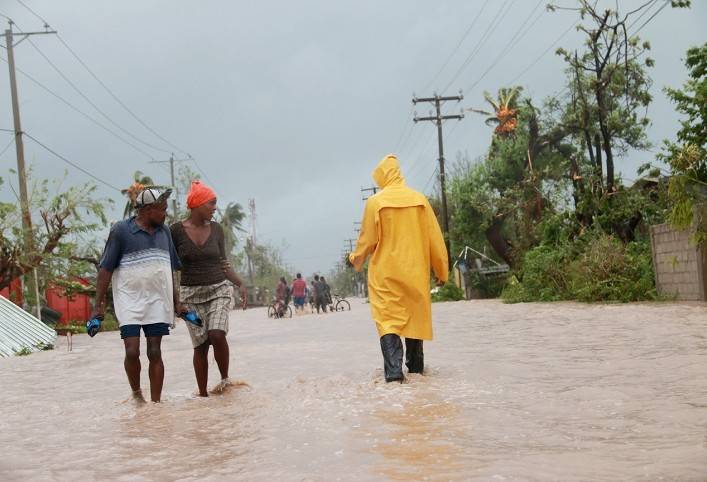 Even as the rain waters cause a small landslide mere blocks away, Rachelle Benjamin’s eagerness to discuss the work that is planned for her community is palpable. In her bright yellow raincoat and flip-flops, Rachelle is a conspicuous figure among the rain-drenched tarps and huts of Jobel camp, a somewhat isolated hillside community in Haiti’s capital city of Port-au-Prince.

“We have worked with the American Red Cross to dig canals through our camp, but sometimes it’s not enough to prevent the rain from flooding inside our tents,” Rachelle says.

As a member of the camp’s vigilance committee, she works closely with Red Cross staff from the Disaster Risk Reduction (DRR) program to assess the community’s needs.

“It’s not usual to have these kinds of [landslides], but we are still working with the Red Cross to dig out canals for the rain,” she says.

Located between the Caribbean Sea and the Atlantic Ocean, the tropical island of Hispaniola – shared by the countries Haiti and the Dominican Republic – is situated along one of the most seismically and atmospherically active regions in the world.

Haiti and its Caribbean neighbors have always been at high risk for a variety of natural disasters, but as the capricious rainy season and impending hurricane season menace the region with heightened threats of storms and flooding, the American Red Cross and the global Red Cross network are continuing efforts to assist communities in preparing for and minimizing the associated risks.

Community-elected committees, such as the one on which Rachelle serves, are an example of how the American Red Cross is working to reduce risk in camps and neighborhoods.

The American Red Cross works with these small leadership groups to train and assist locals to dig ditches and canals, build retention walls, clear ravines of debris and sandbag hillsides within communities both long established and impromptu since the January 2010 earthquake.

To be sure, there is still much to be done to assist the nearly half a million Haitians who remain displaced in camps. But since the earthquake more than two years ago, the American Red Cross has spent more than $30 million on disaster preparedness activities and reached more than 436,000 Haitians in 2011 alone with information and training on how to be better equipped for disasters.

“We are really learning from last year, when we faced Hurricane Irene and Tropical Storm Emily,” says Adesh. “As a Red Cross network, we’re working closely together and also with the Haitian government to make sure that we are minimizing risk and eliminating gaps in any disaster response, especially during the rainy season.”