The American Red Cross hosts a work of art — symbolizing unity — in the form of three stunning stained glass window panels at its national headquarters building in Washington, D.C. Created by the Tiffany Studios and installed in 1917, these windows were funded in part by the Woman’s Relief Corps (representing the women of the North) and the United Daughters of the Confederacy (the UDC, representing the women of the South). They were designed to symbolize reconciliation following the Civil War and are reputed to be the largest suite of Tiffany windows created for a secular environment.

Because of some funding from the UDC, and as part of our organizational commitment to diversity, equity, and inclusion, in 2021 the Red Cross contracted two esteemed historical researchers, one who is a well-known authority on the UDC, and one who is a top scholar on glassworks of the Tiffany Studios, to fully understand the background and inspiration for the Tiffany windows.

The collective findings of these two researchers yielded detailed reports on the creation and funding of the windows, the Red Cross vision for its national headquarters building and windows, the role of Tiffany Studios, and the extent of the involvement of the UDC.

As an organization committed to transparency and its Fundamental Principles of humanity, neutrality, and impartiality, the Red Cross is proud to have conducted this important research. The Red Cross celebrates the diversity, equity and inclusion that enables its lifesaving mission to aid families across the U.S. and around the world in a manner that is sensitive and culturally competent. 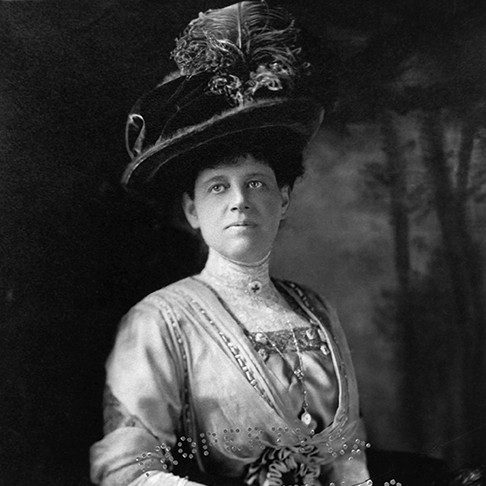 Mabel Boardman was a prominent early 20th-century humanitarian who served as the executive secretary for the Central Committee of the Red Cross, and was the lead individual driving the construction and design of the Red Cross national headquarters building. 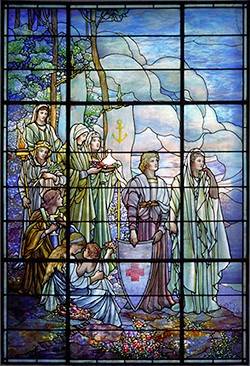 The panel on the left was donated by the Woman's Relief Corps (representing the women of the North). The central figure is St. Philomena, who was noted for her healing powers. She is surrounded by attendant maidens who symbolize love, compassion, hope, mercy, faith and charity. 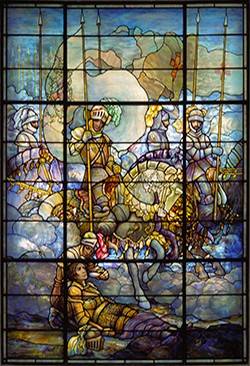 The center panel – donated by the women from the North and the South – portrays an army of knights in armor carrying spears and mounted on horses as they head into battle. The central figure carries a large flag with the Red Cross emblem in the center. Near his horse’s feet lies a fallen warrior receiving food and aid from a faithful comrade. The window expresses that even in the onrush of battle, there is still time to help the wounded. 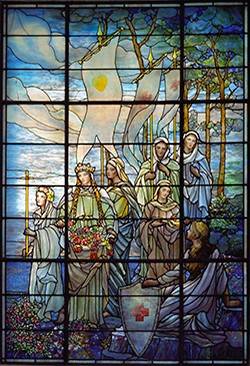 The right panel was donated by the UDC. The central figure is Una from Edmund Spenser’s highly allegorical poem The Faerie Queene, which was written in 1590 and resurged in popularity in the late 19th century. Una represents truth. Her attendants carry a cross and a lamp symbolizing wisdom and a banner with a heart for love. A young woman kneels in front of Una holding a shield that bears the Red Cross emblem.